Throughout their 22-year career, Nerissa & Katryna Nields have always been beloved by young people.

At their alt-rock shows in the ‘90s, it was a common occurrence for parents to approach the sisters after a show in a sweaty rock club with a teenager cum nose-ring in tow confessing, “You are the one music we agree on.” It was not unheard of to see a toddle mosh pit at Nields shows. The Nields have always had a sound that translates across the generations. But when the sisters became parents (each has a daughter and a son, in that order), the occasional kids song (“Superhero Soup,”) was joined by more and more original kid-friendly songs, inspired (sometimes demanded) by their growing children. In addition, they were inspired to mine their childhood for great traditional and folk songs to share with their kids. 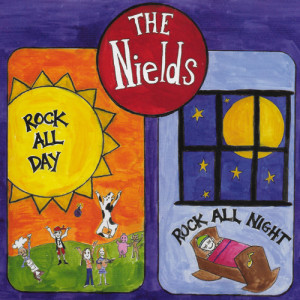 To this end, they convinced their father, John Nields (a famous lawyer who interrogated Oliver North in the Iran-Contra hearings of 1987, successfully prosecuted Deep Throat before anyone knew he was Deep Throat, represented the homeless in a suit against the District of Columbia in the 80’s—and also sang for 20 years in the Christmas Revels) to come up and join in on a collection of the songs they loved so many years ago. Result: All Together Singing in the Kitchen – a spontaneous sounding jam of joyful family music. With the release of this CD, they made official what they had been doing for years: making music for children and their parents to sing together. The CD did very well, garnering rave reviews and getting spun on NPR’s All Things Considered. Two years later, the Nields repeated their successful formula of a post Thanksgiving jam to produce Rock All Day/Rock All Night, a two CD set with up-tempos and dance-ables on the first disk, and lullabies on the second. 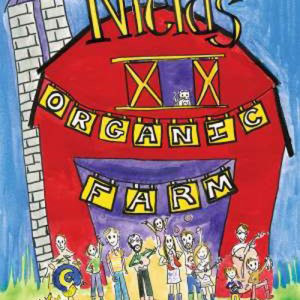 In 2009, longtime Nields supporter and recently new dad Ed McKeon, a filmmaker and folk music DJ in Hartford CT called the sisters to say, “My kids need your video. So I am going to make it.” What resulted was “Organic Farm,” a charming DVD featuring a live concert, mixed with pieces by Henry Chalfant, award-winning documentary filmmaker (“Style Wars”).

After the birth of Nerissa’s first child in 2006, the sisters created a class in the spirit of Music Together for families in the Pioneer Valley of Western Ma called HooteNanny. An early music program for kids aged 0-5 and their grownups, HooteNanny became a powerful way to foster community connections while teaching families to sing together and giving young children the rudiments of music. The popularity of the classes mushroomed, and by 2011, the sisters were running, between them, nine classes a week, including new classes for older kids (HooteNanny Singers) and a parent guitar class (HooteNanny Parent Guitar). In 2013, Nields Family HooteNanny—a weekend, monthly, all ages jam-along/family chorus––was born.

For HooteNanny, Nerissa and Katryna hand-select their favorites songs, as well as write much new material. The music is chosen for its accessibility, but also for its musicality and ability to bear repeated listening and singing. Classes are aimed equally at fostering musical children and at encouraging family connections. HooteNanny is all about singing, dancing, playing instruments, big and small, and most importantly, indulging the imagination and creativity of the families who participate. 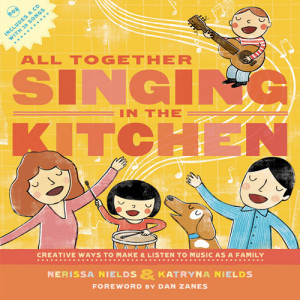 2011 saw the publication of All Together Singing in the Kitchen: Creative Ways of Making and Listening to Music as a Family. Published on Shambhala’s Roost Books imprint and distributed by Random House, this book is the fruit of Nerissa and Katryna’s lifelong experience of music: growing up in a musical family, as well as growing new musicians. The book is part How To and part Why To. It includes a section on beginning basics––singing, keeping the beat, simple accompaniment; a section on songs, dance, play, making instruments, songwriting and that most important talent: listening. Throughout there are anecdotes from the sisters’s upbringing as well as stories about their children today. There’s advice about music lessons (when, if, what school, etc.), family traditions, community celebrations and the many ways music can provide the glue to a family, or a community. Music creates bonds like no other. From the jacket cover:

Music is not only fun, but it’s also the foolproof way to family harmony and connection—it can soothe a crying baby, engage an active toddler, entertain during long car rides, and help everyone get through daily chores.

In All Together Singing in the Kitchen you’ll find all the tools you need for family music making—you don’t need to know a thing about music to get started. With over thirty songs (with lyrics, chords, and audio recordings) to get you singing, musical games to get you dancing, and tips on playing instruments to get you grooving, this book will help you make music a larger part of your family’s life, from playtime to bedtime.

Making music with any group of people is one of the best and surest ways to forge deep emotional connections. Making music with the members of your family practically guarantees a lifetime of distinct, memorable, warm moments of togetherness. 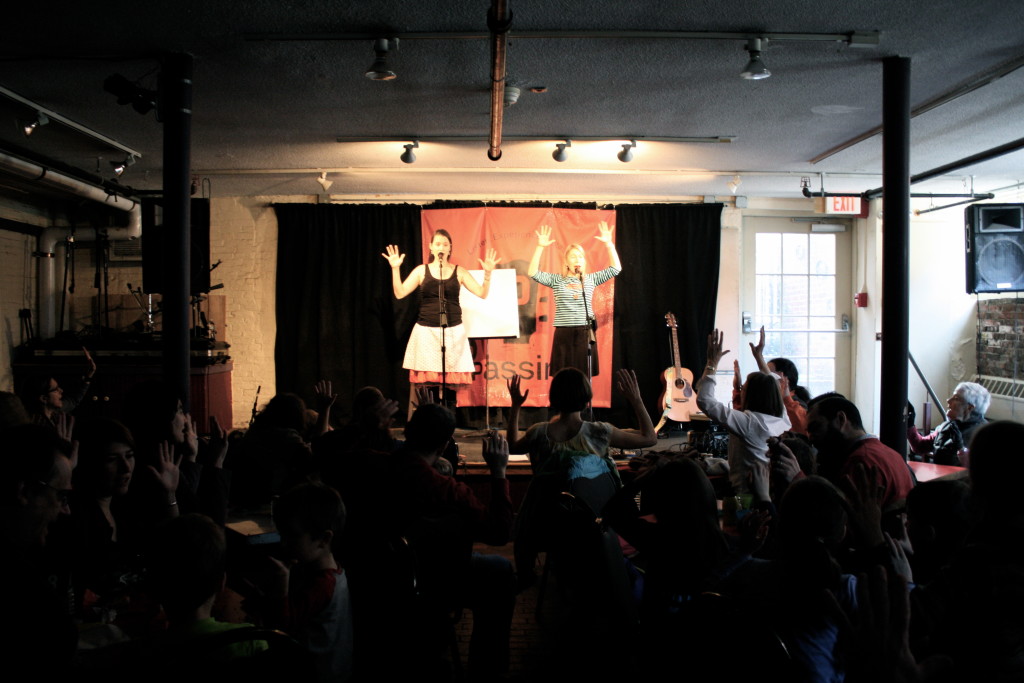 Nerissa & Katryna Nields continue to tour the country playing for all ages. The Nields’s family shows are a blend of Pete Seeger-esque group song leading and Dan Zanes-like reconstruction of old classics, plus their own inimitable style of high energy, whimsy and filigreed harmony singing. In a typical kids show, they’ll pause in the middle of a song to ask an audience member what her favorite color is, or what kind of animal he’d like on the Organic Farm. The songs become collaborations with the young songwriters in the audience. Katryna takes advantage of a giant poster board and her collection of Sharpies to spontaneously create an Aikendrum; as Nerissa plays and sings the song, kids shout out the requested food items-cum-clothing “a cream cheese hat!” “His tie was made of bacon!” “His shoes were made of Dyno-nuggets!” And as quickly as the kids’s ideas wing through the air and up to the stage, Katryna draws them on the poster board. Parents and kids clap along to “Molly the Donkey.” Everyone gets up and dances to “Going to Boston.” And toddlers crowd the stage to wake up Katryna at the end of “Going to the Zoo” when she’s fallen asleep because the zoo was just so much fun. They fervently believe that a group of people singing folk songs together is tantamount to heaven on earth.

Katryna: “Nerissa and I were blessed with a musical family. The kind of family who sang in living rooms or backyards when we went over to friends’ houses, in the backseat- or trunk- of the car when we took a trip of any distance, and of course, around the kitchen table when we were home. We rarely listened to records or tapes or even the radio. Mostly we made our own music. Our father played the guitar and sang the melody while our mother harmonized. My sisters and I learned where our voices fit in. Even when I was a teenager, I knew that this was special. Not everyone had music in their family.”

Nerissa: When I was a kid, I read a biography of Pete Seeger and became convinced that he was not only the greatest living American but also some kind of divine song midwife. Also, that I wanted to do what he did. I learned many of the songs for Kitchen at my father’s feet. He learned these songs at Pete Seeger’s feet. My father bought records by Odetta, the Weavers, Ian and Sylvia, and learned still more songs around the campfire from friends and family in the Adirondack mountains. From the time I can remember, he and my mother shared this music with their three daughters; after dinner often involved long sing-alongs culminating with the dreaded “Irene Goodnight” which meant it was bedtime for real. 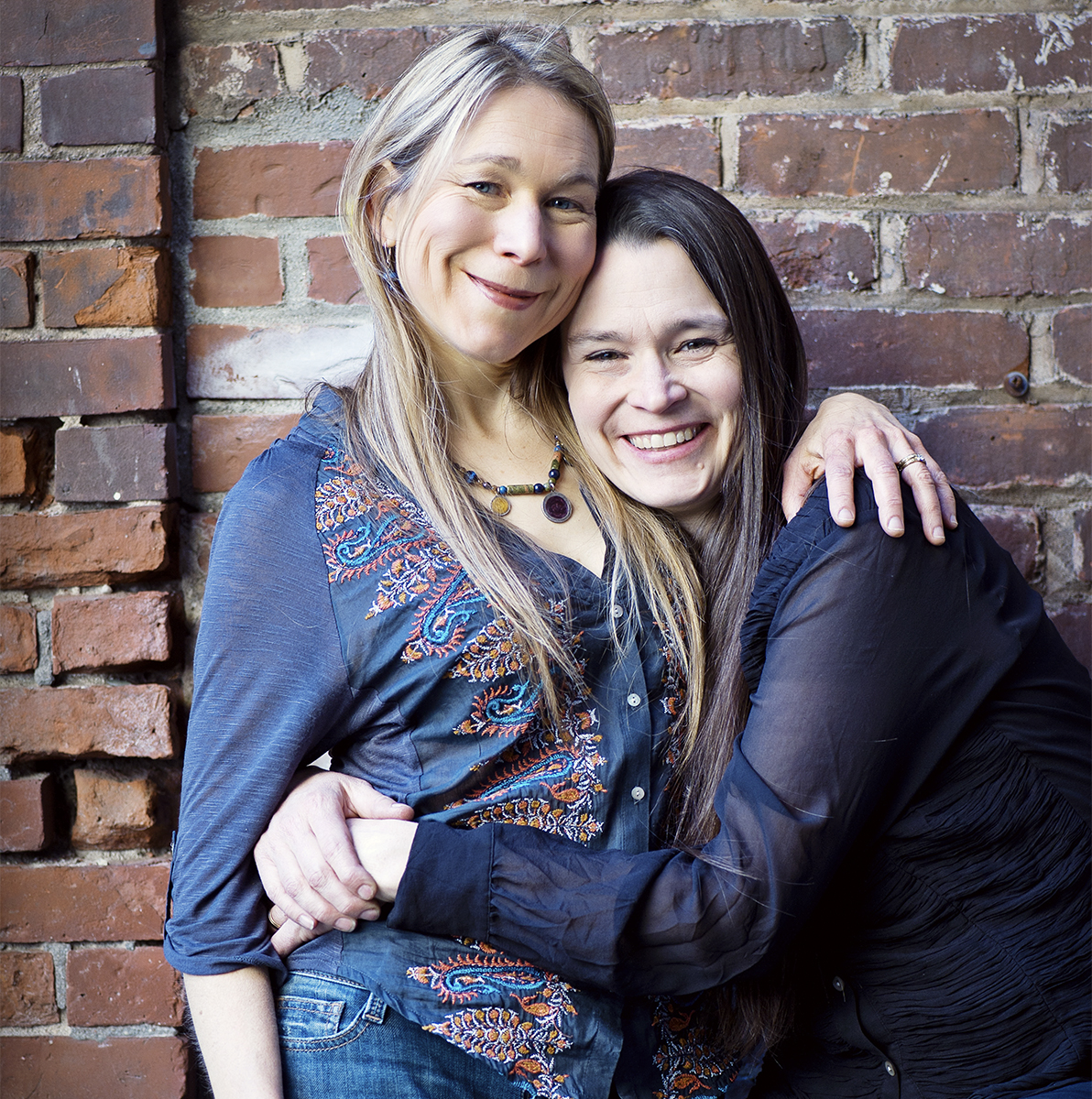 the Nields in the schools

Learn about the Nields’ school programs…

Praise for the Nields

The Nields bring, more than anything, authenticity and joy to the kids’ music world. Their utter delight in performing is infectious and comes across both on record and in their live performances.
-Bill Childs, Spare the Rock

The Nields continue to make vital family folk music with humor and tenderness. Rock All Day, Rock All Night is an all-purpose collection of songs that will serve your family well in times both of play and rest. Definitely recommended.
-Zooglobble

Rock All Day/Rock All Night is a wonderful set for young families, and excellent listening for any lover of traditional American music. It’s a keeper.
-Sing Out! Magazine